“I don’t want to be a hero today. I miss the world already. I miss flying. I miss being a naval officer. I guess I still am, but I’m not sure if there is even a government around to recognize my commission.” 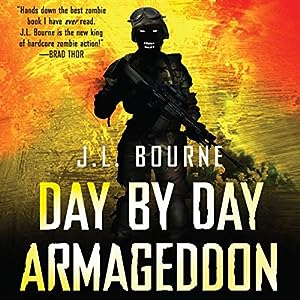 Day by Day Armageddon is okay but not spectacular, enjoyable and quick but not one of the best novels I’ve read (even in this genre). There are two reasons for this: the editing and writing wasn’t great, and the story focused too much on the supplies, materials, weapons, and technical details. The fact that I enjoyed it but didn’t love it is very personal and doesn’t necessarily reflect how others might feel about the story. I know that people read zombie apocalypses and enjoy getting into the details about day-to-day survival but I’m more interested in the relationships between survivors, long terms strategies, coping mechanisms and action. This book didn’t have enough of that to satisfy me. All the events are from one perspective and I didn’t feel involved enough with the main character to care about whether he lived or died.

This particular world consists of a zombie apocalypse and the government decides that its best course of action is to nuke the larger cities which any zombie fanatic knows, is not going to work. They’re just going to introduce irradiated glowing zombies. I’m not sure where Bourne is going with that theme but it’ll probably feature in future books. The main character joins with another survivor and head towards the coast and they find a few other survivors along the way. There’s a climactic battle between them and another survivor group whose motivations are unclear and tactics indicate that they’re just after blood instead of supplies or the military bunker our protagonist finds, which seemed a little odd to me but perhaps the future books would clear that up a little. There are little moments, carefully coined phrases, which allow us to see the darker hopelessness of the situation.

The writing is what I would expect from someone who writes in their spare time. It’s good, but not great. The style is to the point, splattered with cliches and technical details and the language was overly simple. There are a lot of editing mistakes that could have been cleared up with another read through. Despite that, Bourne created a character and voice through the writing. He accomplished that quite successfully. The internal dialogue of a journal completely fits with the character and the goal of the story. The style of writing is what I would expect from the protagonist, but the true emotion, fear and horror takes place outside the journal format which might be why I didn’t enjoy it as much as I expected to. Maybe, the problem for me was that I didn’t particularly feel a connection with any of the characters since the only character we truly were given was the narrator, the others lacked depth and personality. In short, I’d recommend the book to other Zombie readers but I’m not in any hurry to read the rest of the series.

“Medical supplies would be a nice luxury to have, especially since there is someone around that might be able to use them. Of course, a nice bunker with eight-foot thick steal walls, geothermal power, and unlimited food and water would be nice also. People in hell want ice water.

There is no more hell.

2 thoughts on “Day by Day Armageddon by JL Bourne”